The Gear...
Well I reckon I'm pretty much ready for Tuesday's training. The gear is bought and, as I said in the last post, as I shopped on-line and hunted for deals I didn't break the bank.
Here's the gear I bought: 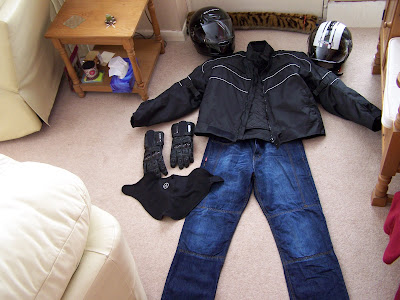 Caberg open face helmet with visor and integral sun visor: £69.99
GMAC full face helmet: £34.99
Cordura jacket with shoulder, elbow & back armour,
reflective piping & detachable quilt lining: £39.99
Armoured leather gloves: £19.99
Neoprene & fleece face protector: £0.99
Kevlar reinforced jeans: £29.99
Total cost of £195.94 (with carriage added it came to £216.17).
I still need to get some waterproof over clothing, but the forcast for next week is cold and dry. I'll be wearing my thermals under the jeans. I've got a pair of silk under-gloves on order but I doubt that they will arrive by Tuesday.
I'm sure as I progress and finally get my own Harley Davidson onto the road I will buy more gear and probably pay a bit more. I've got my eye on a good quality leather jacket. But for now I reckon I've got what I need, and I won't have to wear gear worn by countless others.
I'm really looking forward to starting on Tuesday. Now is the right time. If I leave it it may be some time before my head is in the right place again.
﻿
Posted by Rev Nigel Benson at 07:46 2 comments:

The journey so far...

For most people there are those notable moments in life, moments that will stay in the memory and may even have some affect on life for a considerable time. For a few there are those moments which are truly defining, that permanently alter who they are forever. These are the moments that clearly demark life before and life after.
My moment was at almost precisely 2.09pm on Wednesday 23rd February 2011 on Platform 13 of Manchester's Piccadilly Station. That was the moment a member of a certain rail catering company's staff dropped a yellow metal ramp into the side of my head.
Cutting a long and distressing story short, I am left with permanent dreadful tinnitus, not a ringing in an ear but a horrible loud screaming that fills my head every waking moment and ensures my sleeping patterns are shattered, and which has reduced my hearing so much I now wear hearing aids. I am also left with chronic psychological problems which can make life very difficult at times.
I’m not overstating things when I say that at times life almost seemed too difficult to bear. Fortunately I have a lovely family. But, even so things often seem terribly bleak.
Quite clearly there was a case to answer and legal proceedings were commenced and liability was accepted. At this point in time the legal wrangling is still ongoing. I would forego any compensation if my mind could be cured and especially if this monster that is tinnitus could be slain. But, that won’t happen so money in some amount will eventually be forthcoming.
When things are this grim though, money actually means very little. I needed to find something I could really look forward to, something positive to come out of all this horribleness. As I spent time listening to music in order to try to mute the tinnitus I began to think that pulling a helmet over my head and having the noise of a motorcycle engine could be effective. I have always wanted to own a Harley Davidson ever since before I was a teenager. That was it! I decided I was going to buy a Harley Davidson and the compensation was going to help me do it.
What surprised me was that no one thought I was daft. Even those involved in my psychological assessment and treatment see it as a positive.
I had ridden motorcycles before but not for many years. The last time I had ridden a proper bike with gears was in 1985. Also, having previously owned a bike in the days when a learner could ride a bike up to 250cc I had never got round to taking my test.
First hurdle was to pass the DSA Theory Test. I worried about that. It would be embarrassing for someone who had been riding and driving since 1975, including a period holding an HGV licence, to fail. Paid for the on-line book and swotted.
11th October 2012, Theory Test passed. Phew!
There was no shooting off to book the next possible CBT though. In my new life the right moments have to be waited for. So, Christmas, New Year and several family birthdays came and went before I finally summoned up the correct frame of mind.
4th April 2013, CBT day. Riding a bike was – well – like riding a bike, it came straight back. It was funny sitting atop a 125cc machine that struggled to get past 55mph, but it was great fun. Bloody cold though! I was really pleased when we finished the manoeuvring section and got out onto the road.
One very important thing I learned on the day was that it is not good to use the training provider’s gear. Oh, for sure they kitted me out with a good quality helmet, jacket and gloves, all of which fitted very well. What I couldn’t stand was the smell on my hands when I took the gloves off.
A few days later I paid a visit to a motorcycle clothing and equipment shop. The prices were no more than I expected, but armed with an idea of what I wanted and how much it would cost in the shop, I went on line and bought armoured waterproof jacket, armoured gloves, face protector, Kevlar reinforced jeans, an open face helmet with visor and internal sun visor and a full face helmet of gold ACU safety standard without breaking the bank (well any more than any bank is already broken).
Of course, whilst all that was going on I was researching Harley Davidson motorcycles in an attempt to try and decide which model I would want. I liked the look of the Blackline but soon decided that not only was it a tad too low it was also clear that a premium price was put on a model which actually offered less in equipment than models costing less.
I then fell for the Dyna Wide Glide with its retro chopper styling and extended forks. 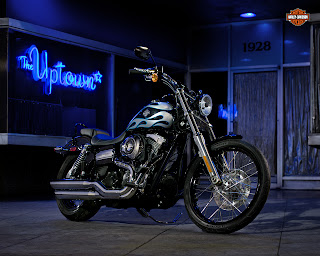 On a visit to my youngest daughter who lives in Leeds, I took myself off to Leeds Harley Davidson. There wasn’t a Wide Glide in stock but there was a Dyna Fat Bob. I didn’t like the bobtail of that model but the aggressive wide wheeled and double head-lighted front end caught my attention. I decided a Fat Bob with stage one customising including Vance and Hynes short pipes and a replacement rear mudguard would be the bike for me. 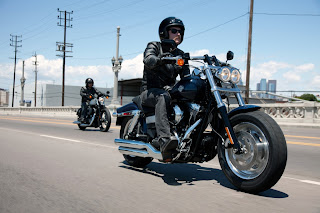 That was it; the Dyna Fat Bob with modifications was the bike for me – until a few days ago when I caught sight of the brand new Softail Breakout. That’s it, totally smitten. 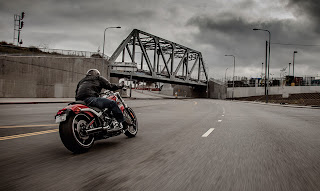 In the meantime I have a two part motorcycle test to pass. I booked the first part of my Direct Access training today. So, I’ll be on the back of a 600cc bike next Tuesday. Can’t wait!
I’ll let you know how it goes.
Posted by Rev Nigel Benson at 16:42 3 comments:

Rev Nigel Benson
Rev Nigel Benson is currently the Curate in the Benefice of St Mary's Haxby & St Nicholas Wigginton, York and Chaplain to two RAF Air Cadet squadrons. He is a Grandfather, a Biker, a Video Film creator, an Illustrator and Writer. Nigel is an Army Veteran, a former Police Officer and was an Investigation Officer for a central government department prior to retiring in order to answer the call to ordained ministry. He hates bigotry in any form and has modern liberal views.