After putting up yesterday's post I did some digging on the interweb and came up with some photos of bikes like the ones I have previously ridden... 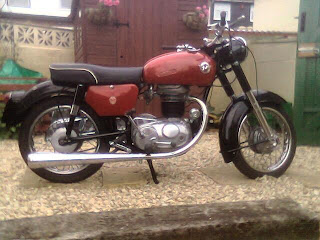 The first bike I ever rode was a Matchless 250cc
similar to this one. It was probably roundabout
1972. So, I would have been 14 years old or so.
I remember it being very heavy and very loud. 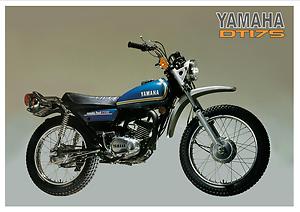 The first bike I owned, a 1974 Yamaha DT175
which I bought in 1975 when I was a young
soldier had the same colour scheme as the one
in the photo. For its time it was a good looking
machine. Annoying problems with cutting out
in wet weather when water got under the suppressor
cap. Had to carry a can of WD40 wherever I went. 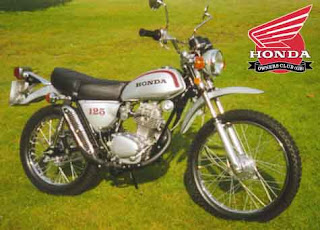 Same time as I got my Yamaha my best mate bought
the Honda 125 trial bike. This had a four stroke engine
so my two stroke 175 used to leave him standing. We
biked around a lot together though, often where we shouldn't. 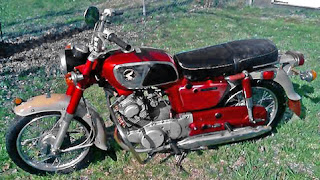 I went for a few days leave with an army mate to
his home in Scotland. He had one of these a
Honda CB175 which practically fell to pieces
when we got stopped by the cops in Kilmarnock.
His dad went straight out and bought him a brand
new Honda CB250. During that week we discovered
the joy of the coast road from Ayr to Stranraer. 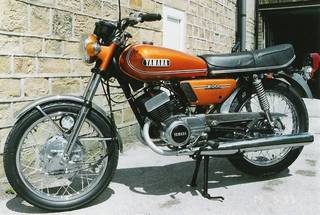 It was one of these a very nippy Yamaha RD200
that I came off when a car pulled out of a side road
in front of me as I came off the level crossing at
Starbeck near Harrogate. It's true that things go in
slow motion when you fly off a bike. Really hurt! 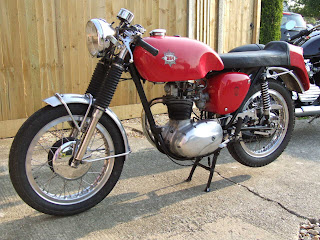 I used to borrow a BSA 250 similar to this, but in
green. A bike with attitude that used to turn heads. 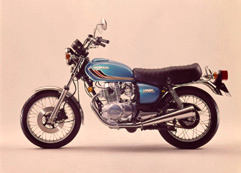 A good army mate of mine when I was serving in
Germany in the 1970s bought a Honda 250 Superdream
very similar to the one in this photo. If I remember rightly
the colour scheme is the same. One night I got thrown
painfully off the back when he got the front wheel stuck
in a tramline in Krefeld. A trip to the Krankenhaus followed. 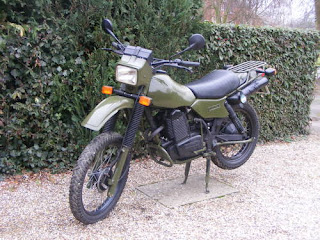 Prior to doing my CBT the last time I rode a 'proper'
bike was in 1985. I was an adventurous training instructor
at the time and we were running a camp for young soldiers
in Devon. I don't know why but a couple of these type of
Armstongs arrived and a few of us took full advantage.
﻿
﻿
Posted by Nigel Benson at 16:14 1 comment:

Thankfully my back has improved and Mod 1 training is booked for 4th May with test the following day. I'll be glad to get that dealt with so that I can get on to the serious business of road training. 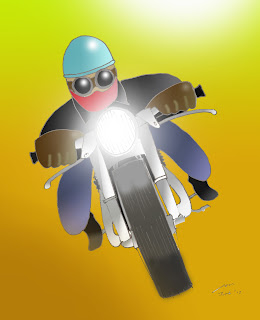 One of my doodles from
headontheblock.blogspot.com
This brings back memories of riding a BSA Starfire I used to borrow off a mate in 1975. I remember back then, depending whose bike I was using, having to check which side had the gear change and which the rear brake. At the time I owned a Yamaha DT175 which was a great little bike on and off road. I also remember coming off another mate's Yamaha RD200 when a car pulled out in front of me just as I came off a level crossing. Early lesson in why crash helmets and leather jackets give good protection. Suffered a rotten friction burn on my hip which put me in hospital for a week. Lesson learned: wear protective trousers!
Posted by Nigel Benson at 15:08 No comments:

Thwarted by a dodgy mattress...

Just a bit hacked off; been away on a work related course which involved three nights staying in accommodation provided by one of our larger provincial police forces. Course was good, accommodation was not! The first night I slept on a mattress that would have suited Quazimodo. Mattress was replaced but nights two and three were little better. So, with back already weakened I drove home and arrived with spine in spasm. Saturday's Mod 1 training and Sunday's Mod 1 test are off. Not impressed!
Posted by Nigel Benson at 09:18 No comments:

Whilst I am enthusiastically blogging away about the preparation and the training I think, given the fact that this is a blog partly about dealing with the after affects of head injury, I should pay some attention to that aspect of the journey.

I have proved one thing that I have been saying for months and months to be completely right; putting on a helmet and riding a bike with the associated engine and wind noise completely cuts through the awful screaming in my head. It is such a relief and it is clear to me that riding should be a big daily dose.

Perhaps, when the training is done and the Harley Davidson is bought I will have to turn my mind to how I can ride every day. That, I guess, is nigh on impossible given our erratic British climate. Perhaps a move to sunnier climbs? Who knows? 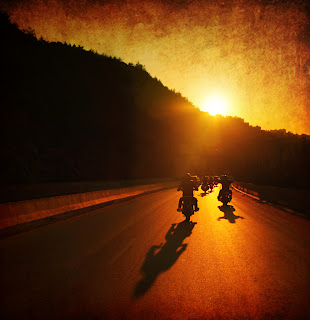 I have been somewhat remiss in not mentioning the fact that I am being expertly trained by the guys at Ride4Life, based in Strensall York. A friendly bunch of guys with a wealth of experience and knowledge to impart.

Road training was excellent, felt good to get a decent sized bike out onto the road. There comes a point though, when it actually dawns on you that although you are training you are having to deal with real life traffic situations. This was brought home by a number of incidents including a car backing out in front of me as I made a left turn, an oncoming ambulance using the middle of the road in busy traffic and an overtake requiring some pretty nifty timing. Pleased to say I handled each situation well. Not that I'm getting over-confident; there's a lot more to learn.

Riding some of the twisting country roads was great and gave me the opportunity to put into practice the art of counter-steering. Seems rather counter intuitive when talked about, but comes very naturally in practice. I guess it must have done back in 70s and 80s when I last rode and probably did it without realising. Of course there was no CBT back then; one just climbed onto any bike up to 250cc, having fastened L plates to it, and off you went. Bugger the theory. I'm very glad it's different now. Kids back then were jumping on to Yamaha 250cc bikes and the like, which were well capable of speeds over 100mph, and inevitably too many were badly injured or died.

One more Mod 1 training session before the Mod 1 test. Frustratingly I have an enforced break of over a week as work drags me away.
Posted by Nigel Benson at 15:03 1 comment:

It's been a long, long time since I rode a bike that had any real meat. So, I was a bit wary yesterday when I turned up for the first session of Mod 1 training. I knew I would be using a 600cc Honda and was worried about getting used to the size, weight and power. I shouldn't have wasted my time fretting, the bike I rode was a Honda CB600F. Fuel injected, water cooled and with plenty of meat, but a monster it was not. I don't mean that as any form of critisism. 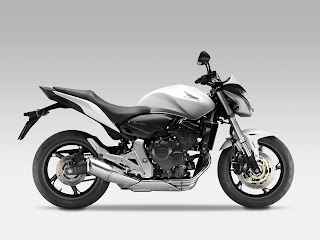 Not the exact model but very similar.

I'm absolutely sure the bike, on the open road, would be capable of arm pulling acceleration and a top speed of.. well a lot more than I'll ever do. But at the slow speeds required for the off road manouvering I found it to be a light and agile machine. Of course I haven't really got much to compare it with, but I was pleasantly surprised. It's amazing how much difference just a few hours makes to improving those figure of eights, hazard avoidance moves and quick stops. A real buzz when the instructor tells you that you've done really well, not just once but repeatedly. Good confidence booster. Great medicine for this dented mind!

It was a cool but generally bright day (just the one snow flurry that lasted all of about 15 seconds). I'm not sure if I'd donned a layer too many or if it was the concentration, possibly a combination, by the end of the day my jacket liner was wringing wet. I was absolutely knackered too. Aching in some weird places today. But it was great fun, really interesting and I can't wait to get back on the bike again. The next session will be out on the road.
Posted by Nigel Benson at 14:48 No comments: