A short animated ride on a Harley...

I drew this animation not long after my head had been bashed. Clearly my dented mind was formulating the plan.


You can find more of my doodles at http://www.headontheblock.blogspot.com
I would love to design custom artwork for bikes. This guy (after some more work) will be on my bike eventually: 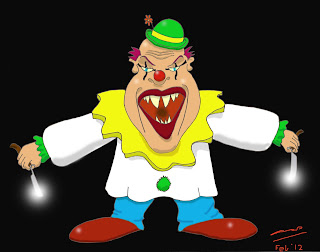 Posted by Nigel Benson at 11:52 No comments:

For the last few days our home has been blessed by the presence of our youngest daughter over from Manchester while her boyfriend does some urban exploring in France, Luxembourg and Germany. (See: http://www.consideratetrespassing.blogspot.com for some of his incredible photography)

This meant a trip into York yesterday to do some shopping and browsing with wife & daughter. As you will know if you've read previous posts, being in crowded places especially where there is a lot of movement is very difficult for me. Four hours of that left my head in a state.

So, the best medicine was to take a ride out on the old Triumph. I set off up the ring road and then on to some quieter roads around a couple of the outlying villages. I then remembered that both York Races and a soccer match between York City and Sheffield United were on and as it was just after the last race the roads in and around the city would be very busy. I decided that it would be ideal practice for coping on the busy streets and would up my concentration levels which would distract further from the mess in my head.

I was right! It was slow going manoeuvring amongst coaches full of race goers or tourists, avoiding suicidal (probably drunk) pedestrians and frustrated car drivers on the narrow streets of my ancient home city. It's a good thing to get attuned to every now and again. It is great to get out on to the open road and open up the throttle a bit and do little more gear changing than sixth to fifth and back, but I reckon if you don't get amongst the urban traffic every now and again you could lose the feel for it. For me it did two things, gave me good practice and sorted my messed head out.
Posted by Nigel Benson at 03:25 No comments:

I have had some great rides over the last week and the weather has been a bonus. There are so many bikers out on the roads that I'm beginning to feel like a nodding dog.

Most bikers I encounter are wearing leathers or other suitably tough and reinforced clothing. But, it seems the hot weather is bringing out the idiot in a few. I'm not referring to teenage twist and go riders who know no better than to wear chavsuit bottoms and t shirts, I'm referring to experienced bikers on large sports machines and cruisers wearing little more than would be risqué on the beach.

Today, as I waited for my wife outside our local Moss Tyres while she paid for work on her car, I saw a sports bike go past two up. Male rider and female pillion passenger, who was clinging limpet like to the rider, were both wearing shorts and vests.

Now I know that in this heat wearing leathers, especially when stuck in stationary or slow moving traffic, is really uncomfortable, but I reckon boiling yer bits off for a few minutes is better than risking losing a large percentage of your skin. OK so I'll admit I've been wearing jeans, but they have knee and hip protection and are Kevlar reinforced.

For those that doubt the wisdom of this check this out: http://fzronline.com/wiki/doku.php?id=extreme_road_rash-cause_effect_and_lesson_learned
Posted by Nigel Benson at 16:08 No comments:

Over the course of the last few rides I began to notice that the handling of the bike was not as good as I wanted. I thought at first it was just me and confidence problems. It all came to a head last week when, due to the dreaded resurfacing and the 'Slow Loose Grit' signs of my usual route home from work, I took the longer route home along the by-pass. This is a dual carriageway and I kept it steady not breaking the 70mph barrier. Even so, during a couple of overtakes I felt the back end wobble alarmingly as I crossed the central white line.

Over the next few miles handling got worse and the wobble set in. It dawned on me, and yes I admit to being really slow on the uptake, that I had a near flat back tyre. I managed to crawl the last bit to home. Tyre inflator confirmed a zero psi reading. I reinflated the tyre to the reccommended 41 psi and put bike away for the night. Checked in the morning to find the pressure had dropped to 35psi.

Overnight I had done some on-line research and decided on a pair of Bridgestone Battlax BT023 tyres. Local place quoted £275 fitted and balanced. 'Bit steep' thinks I. Another call followed by a very careful ride the few extra miles to Malton and I'd saved myslef fifty quid. Even tempered by the fact that I was riding on brand new tyres the ride back was the most enjoyable for a while. It will only get better as the tyres bed in.

I have to say it frightens me to think that I was riding at speeds up to 70mph on a nearly flat tyre. Big lesson learned.
Posted by Nigel Benson at 11:56 No comments:

Roundabouts, junctions, driveways and other traps where car drivers wait to pounce...

Following that dreadful week when the bike was in the workshop I have taken every opportunity, weather permitting, to ride. It's been great and as I predicted has given me periods of time when the after-affects of head injury are diminished to bearable.

One of the reasons why riding helps is because of the total concentration required in order to stay safe. For any, even slightly experienced riders who may read this it will be nothing new to hear a fellow biker saying that the majority of car drivers seem to be totally oblivious to motorcycles.

Anyone who has spent more than a few days travelling in and around my home city of York will know that traffic does not flow easily around the narrow streets and the outer ringroad is little more than an elongated car park at peak times. Although I am mostly content to just go with the flow I have occasionally done a bit of filtering. It is while doing this that I encounter three distinct types of car driver: those who use their mirrors, see a biker and give space, those who just don't look and stay fairly central, and those who take great joy in moving on to the central white lines when they see you coming (that's in both directions). I have no wish to interfere with anyone else's journey, so why do these morons want to make my journey as difficult as possible?

But it doesn't seem to matter where I ride there are those traps where car, van and wagon drivers lurk, seemingly waiting to try and maim a biker. I can't recount (or even remember) every incident over the last few weeks but it was pretty scarey when, having negotiated a large busy roundabout with five exits, giving careful indication and observing good lane procedure, to find, as I did my final lifesaver on exiting, a black sports coupe with its front offside wheel almost touching my rear wheel. Quick acceleration got me out of that one.

Driveways and junctions are like man eating monsters. I've even begun to find it amusing when I see the look on the drivers' faces as they see you for the first time, front wheel inches from their door.

Yesterday, literally round the corner from home, a young buck in a black hatchback backed out of his drive and, with me stationary after a fairly nifty emergency stop, almost backed into me. This one even had pedestrians shaking their heads. Again I saw that look as he saw me for the first time in his rear view mirror and then shot off in embarrassment.

Not to worry though, I ride defensively, almost embarrassingly so at times. None of this is going to put me off. I am enjoying riding and the process of getting better at it.

To make things better I need new tyres. The ones I've got on the bike are OK but are not a pair and they don't give me confidence in the lean. I reckon a set of Bridgestone Battlax BT023 tyres will fettle that. The reviews read really well.

The road to eventually owning a Harley is looking longer as the legal issues re dented mind plod on. But Hey! We'll get there. In the meantime big black Triumph will get me everywhere else.