Of tramlines, tramlines and bigotry...

In this country tramlines are not generally of concern to motorcycle riders, unless you happen to ride around Manchester, Sheffield or the odd other place that has opted for this 'greener' form of public transport. As reported in an earlier post, encountering a tramline on a bike can lead to a swift trip to the local hospital (or krankenhaus, as I was thrown from the pillion whilst living in Germany).

Since that event and up until last Friday, tramlines never entered my mind in the context of riding. Then I had a ride down to the local Triumph dealer to enquire about leaky forks. I had had them done recently and had resigned myself to the fact that they had been badly done. Service guy gives me a price for new seals and when I tell him about the recent fix he ask if I have any tramlines. My blank expression prompts him to go outside and have a look for himself. There he shows me those neat parallel scratches running up the length of each fork stantion. Apparently it doesn't matter how good the seals are if there are these scratches, the oil will escape.

So, I feel a little guilty at having blamed the guy who had done the recent seal change. But, then I realised that he should have spotted this scratching. Not that I was going to go back to that particular establishment as the technician in question had made a deeply offensive racist remark about a news item on the radio in my presence. I am ashamed to say that as he was in the process of replacing my forks I just stood in embarassed silence. The guy's a bigot and I hope I never meet him again. I'll certainly never push any of my hard earned cash in that direction again.

Next Friday the bike goes in for replacement stantions to be fitted. Up-shot is I get to ride a courtesy bike. Being a Triumph dealer it's not going to be something small. I'll let you know.
Posted by Rev Nigel Benson at 11:08 6 comments:

Tuesday was an overcast and chilly day but, as you can see from the last post, I made good use of it. Yesterday was shocking, it rained heavily all day and the wind was blustery. Today was glorious. I didn't even bother with thermals and made use of the summer gloves. Back on to those rural roads... 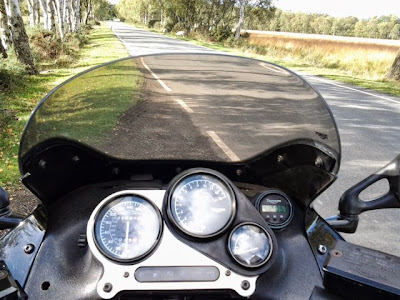 I've got to get myself a Go-Pro camera to mount on the
bike, so I can do this on the move and take video footage.

Last week I had very little chance of riding because of a combination of poor weather and the need to use the car for work. That was followed by a training weekend for my ministry to which I needed to take enough stuff as to make riding too risky, especially as we were experiencing fairly gusty winds.

So, today I was pleased when things brightened up a bit and I managed to free the Triumph from the garage. It was rather fresh though and I incorporated a number of layers when dressing for the ride, including thermal long-johns. I still felt the cold but it was actually rather refreshing, sort of reminded me how in touch with the elements I am when I ride; and that's part of the joy.

It really is just round the corner from home to open countryside and that was where I headed. The roads in places still had a damp sheen and in some places are in a terrible state of disrepair. Added to that were large stretches of clumpy wet mud left behind by farmers' tractor wheels. It all certainly upped the concentration levels. Nevertheless it was a great ride out, a ride with no destination, making navigational decisions as I went along.

On the homeward part of the journey I travelled from Flaxton across Strensall Common. The road would be great for testing the lean, wide sweeping bends and good views, if it wasn't for the free range sheep. Hundreds of acres of common land to roam around on and they all choose to graze along the side of the road. And boy are they unpredictable! It all adds to the fun though. 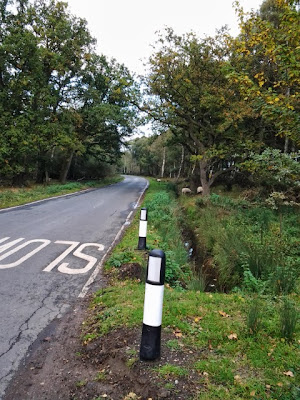 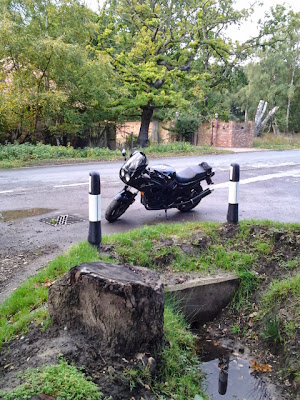 She's such a poser 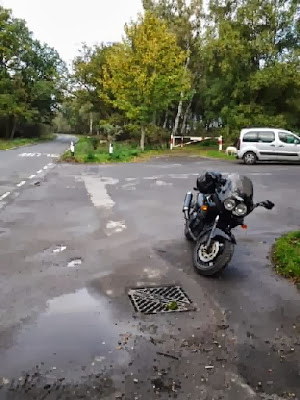 Rev Nigel Benson
Rev Nigel Benson is currently the Curate in the Benefice of St Mary's Haxby & St Nicholas Wigginton, York and Wing Chaplain of Central and East Yorkshire Wing RAF Air Cadets. He is a Grandfather, a Biker, a Video Film creator, an Illustrator and Writer. Nigel is an Army Veteran, a former Police Officer and was an Investigation Officer for a central government department prior to retiring in order to answer the call to ordained ministry. He hates bigotry in any form and has modern liberal views.