Well it has been rather a while since I last posted. That's because life has been busy, work, ministry and of course spending as much time as possible on the Harley.

I will try to post more regularly, but in the meantime here's a few self indulgent photos... 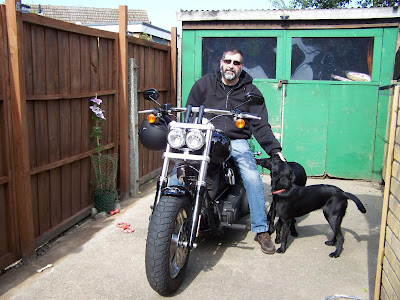 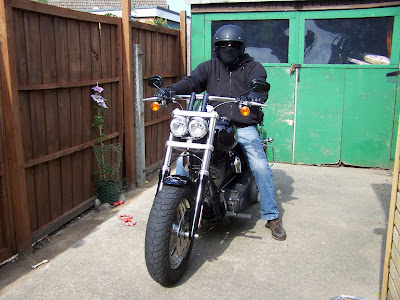 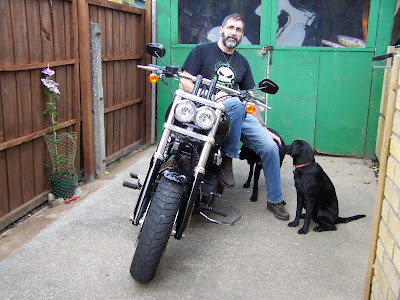 A few days later than promised, but here are some decent definition photos of the Harley..... 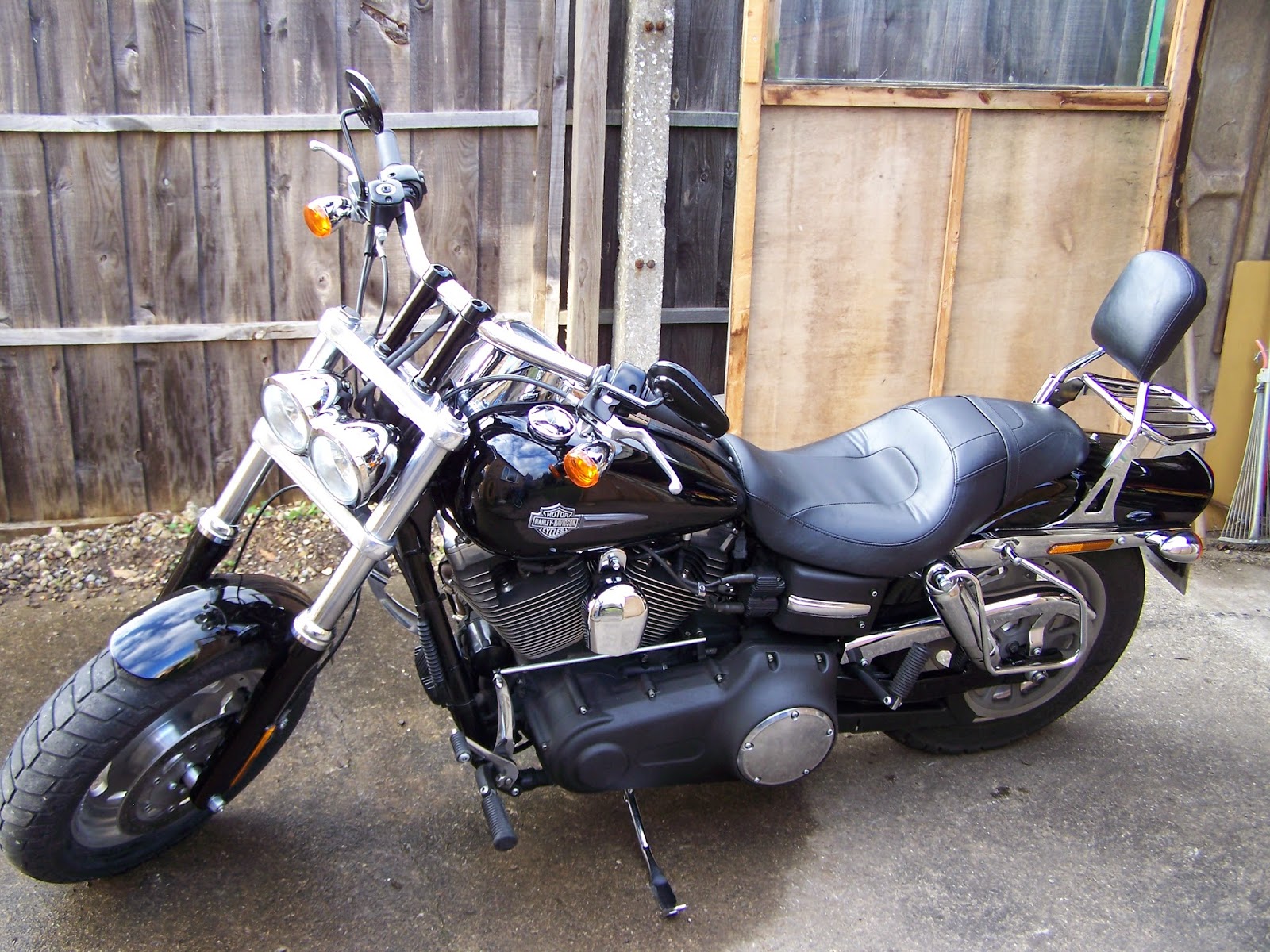 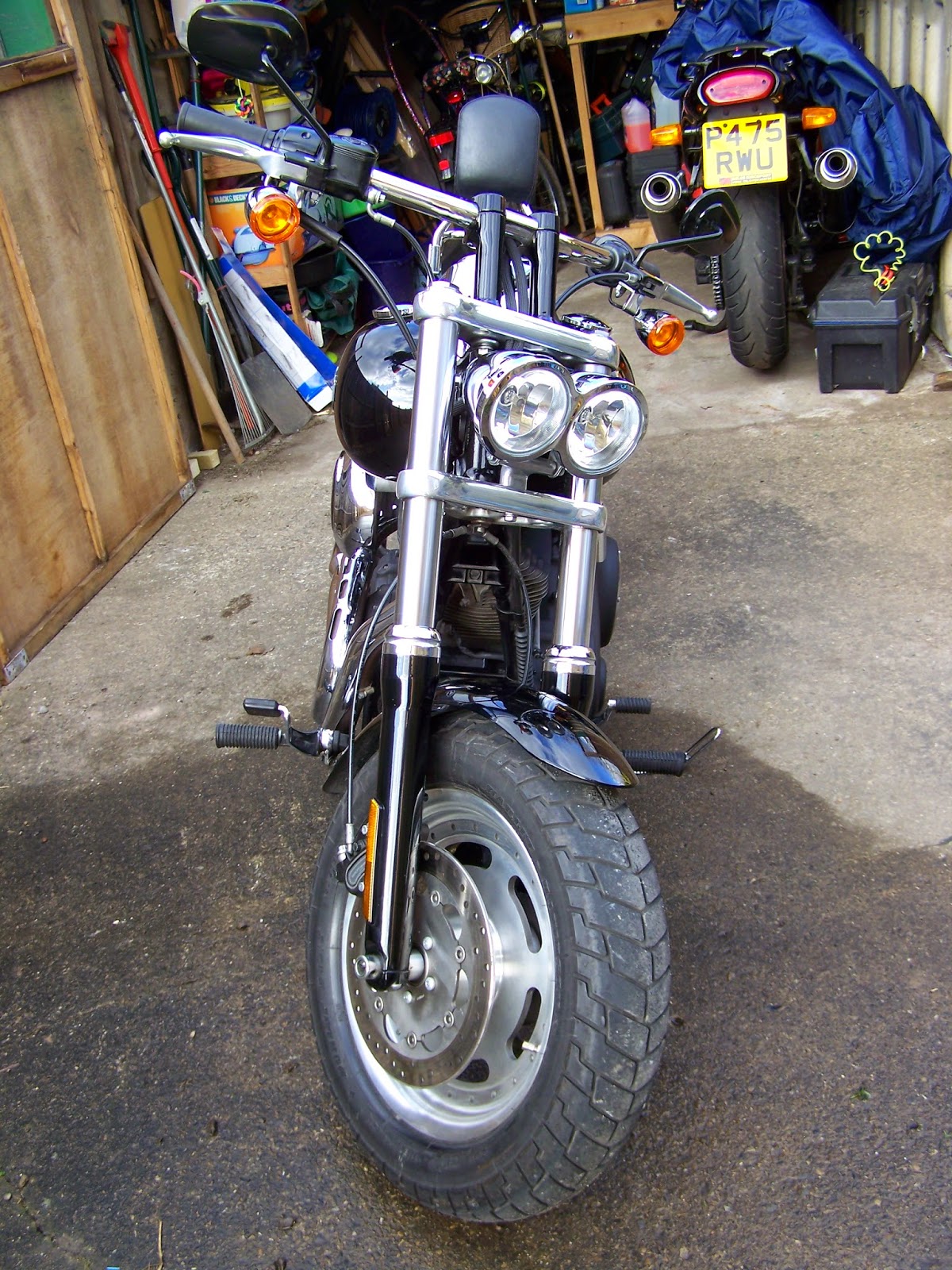 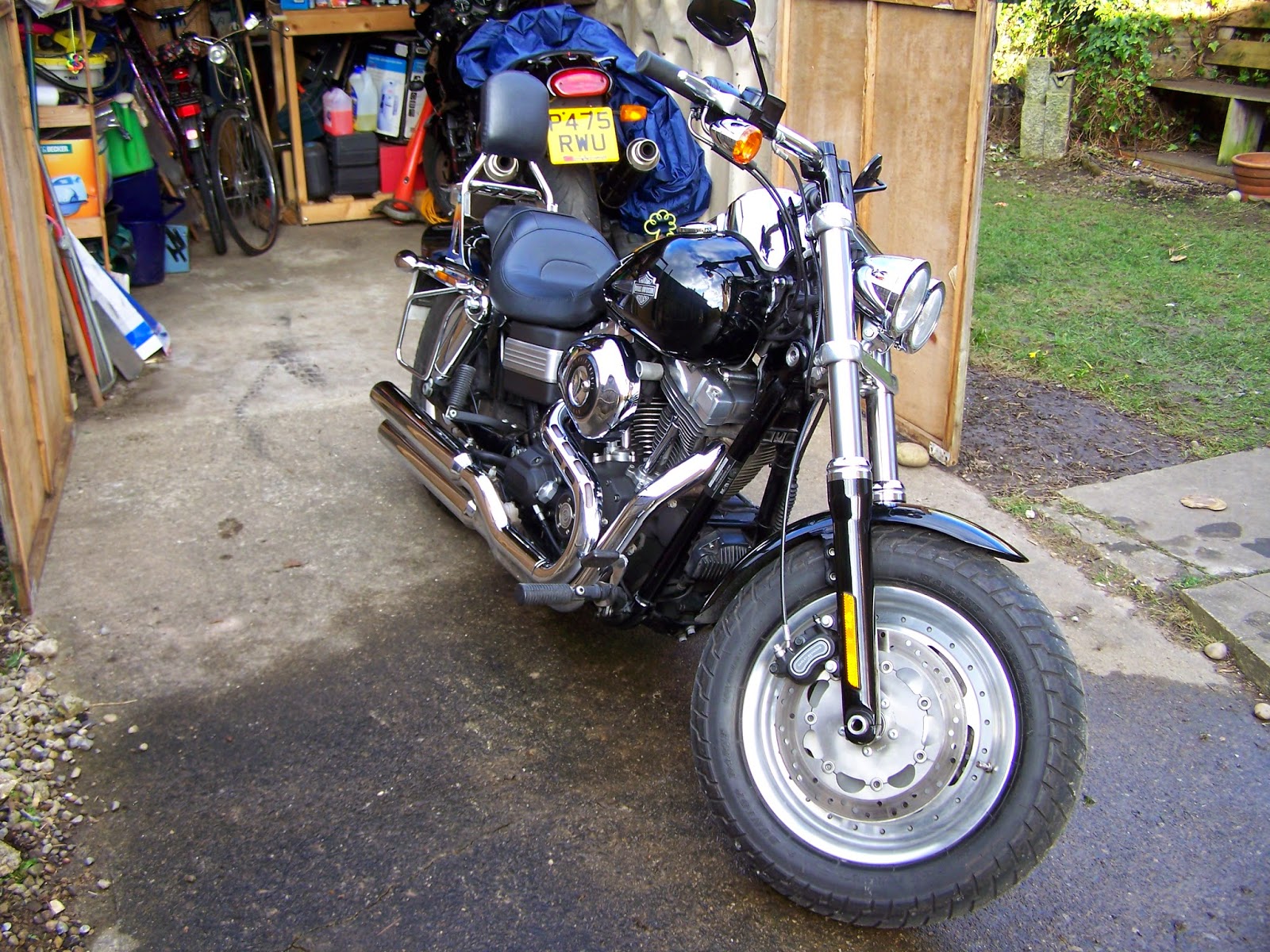 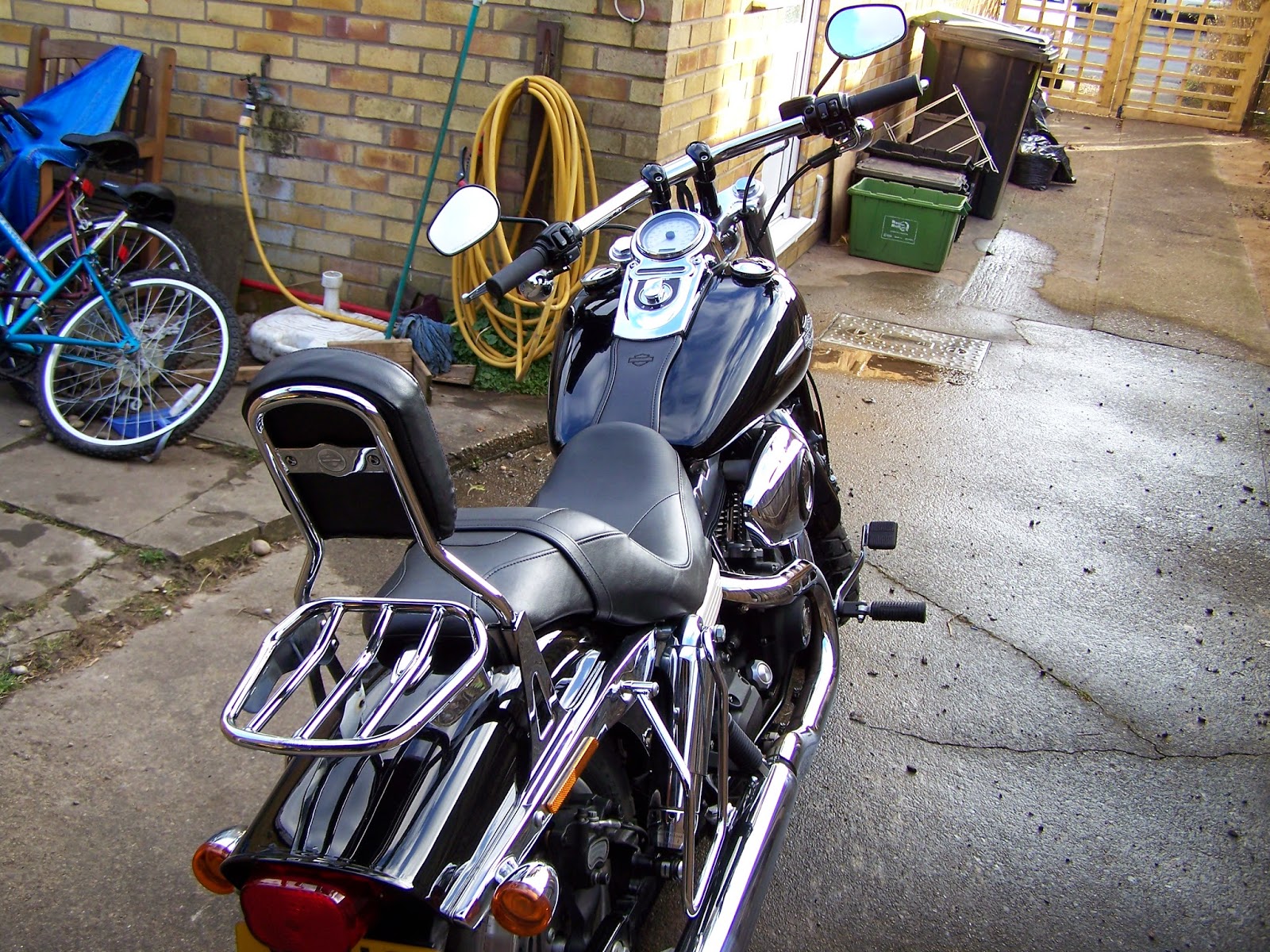 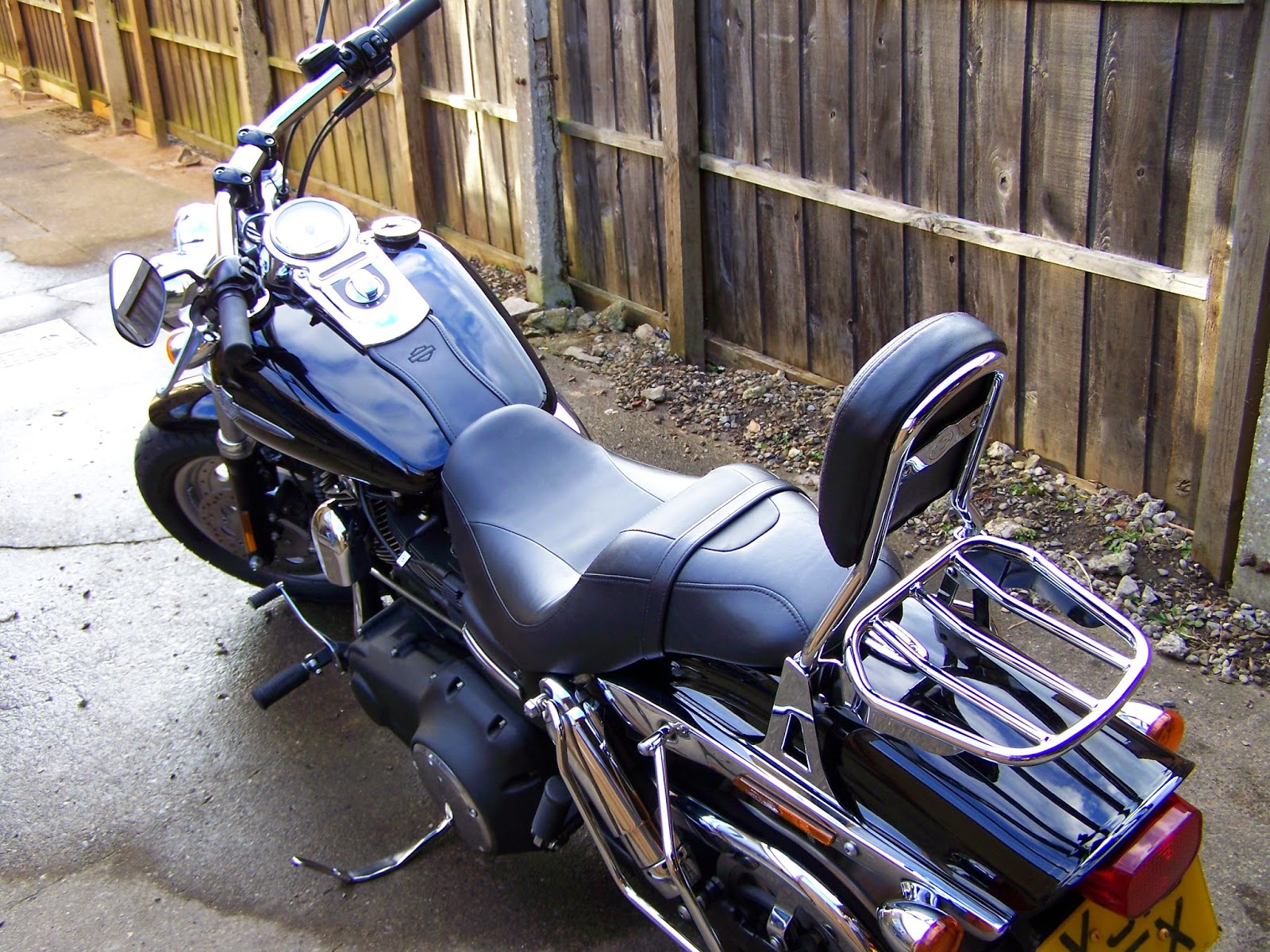 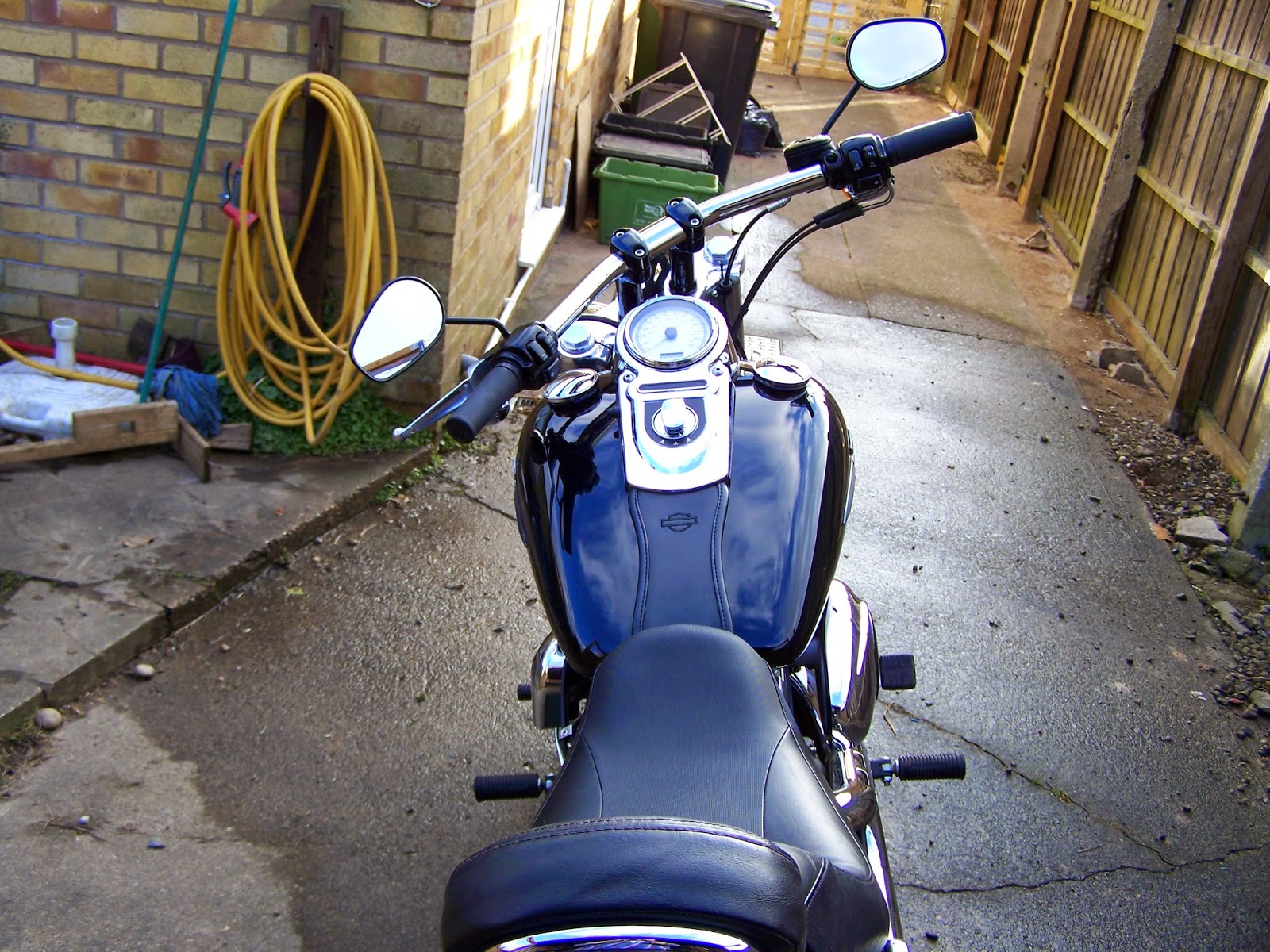 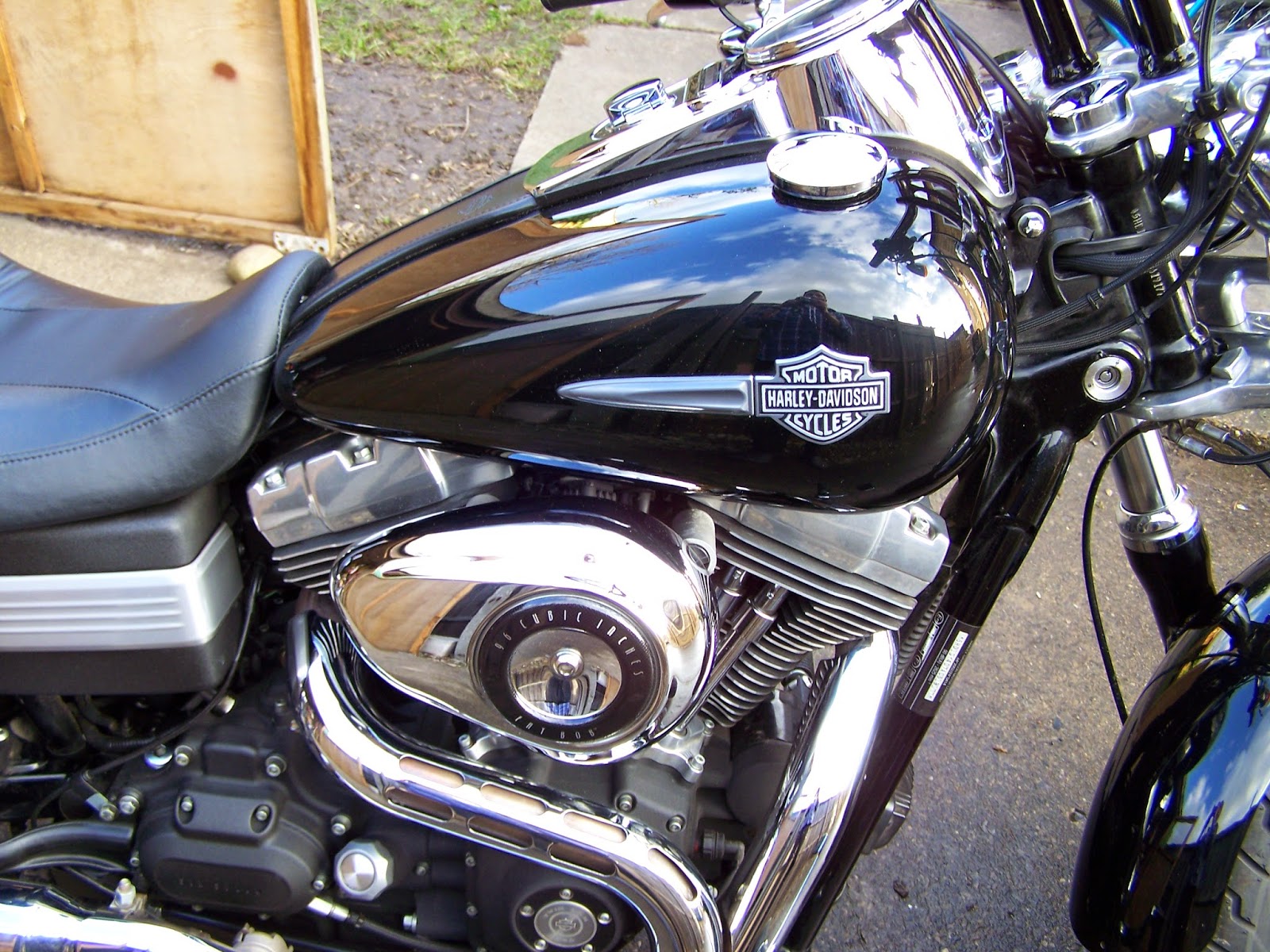 I can't even begin to explain what the buzz feels like
when I'm riding. My face aches from smiling so much! 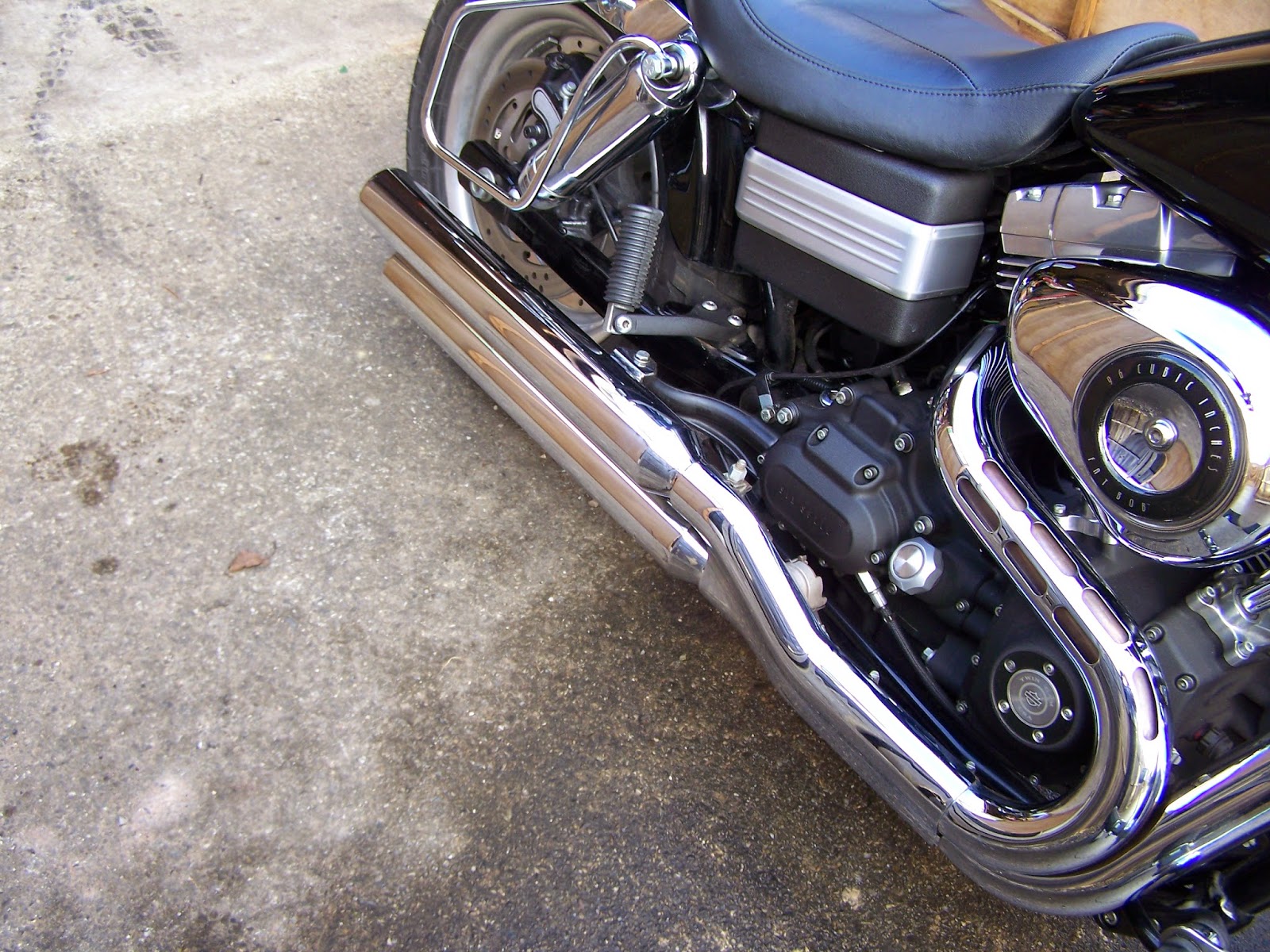 The back end of the exhaust is definately after-sales.
The sound is great. 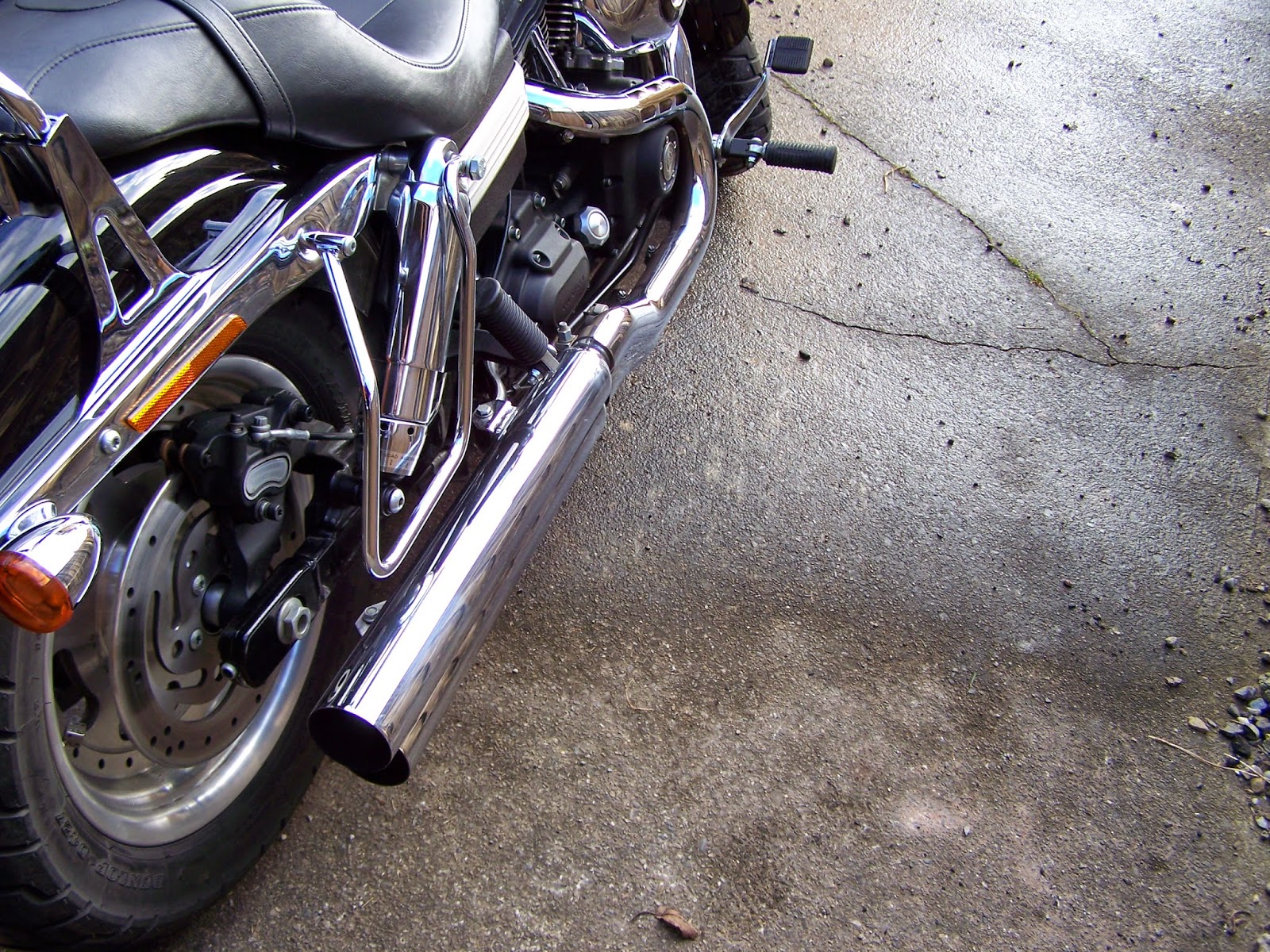 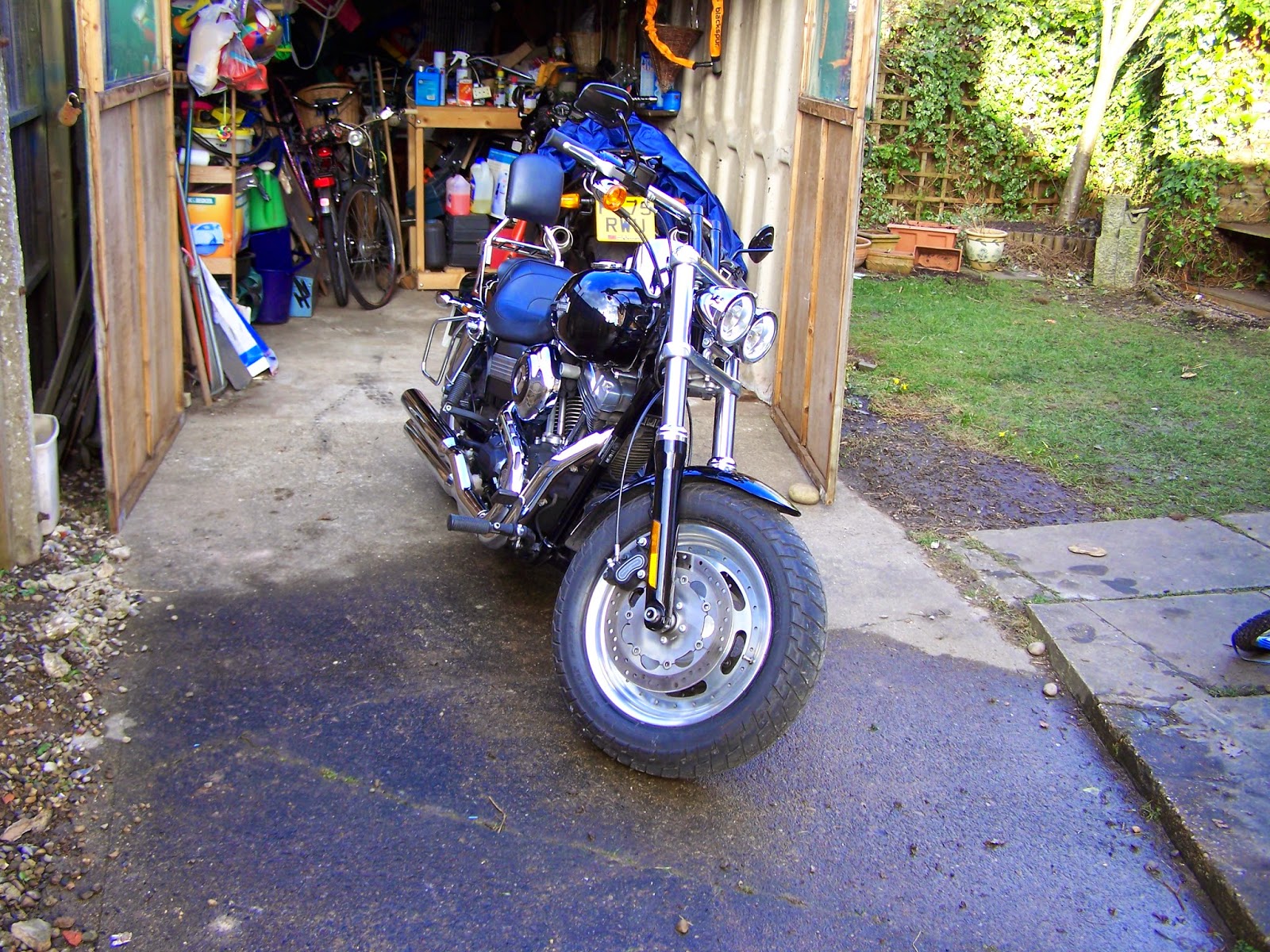 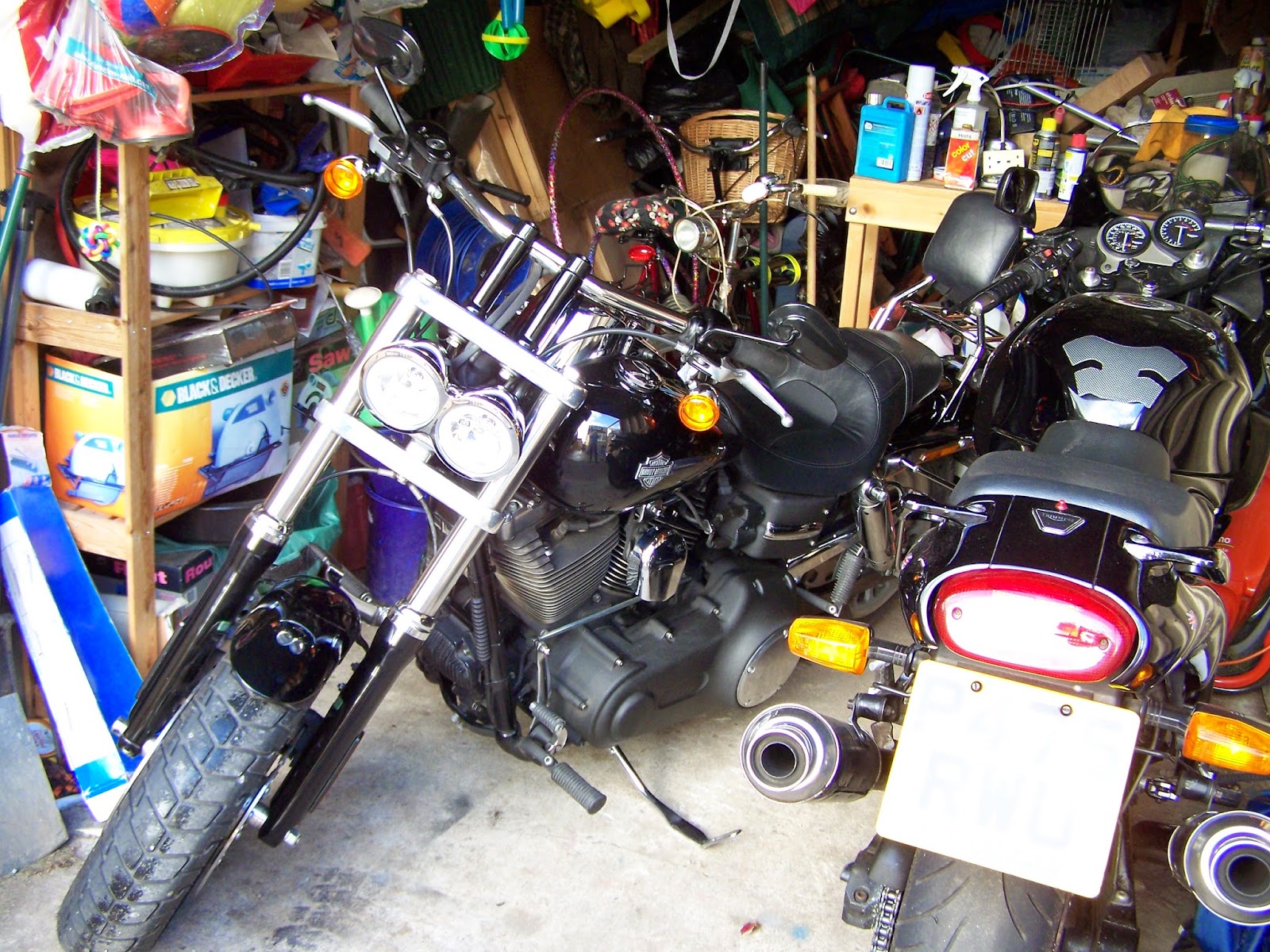 There's something of a colour theme going on here.
Well, as Henry Ford is credited as saying,
'You can have any colour you want so long as it's black'. 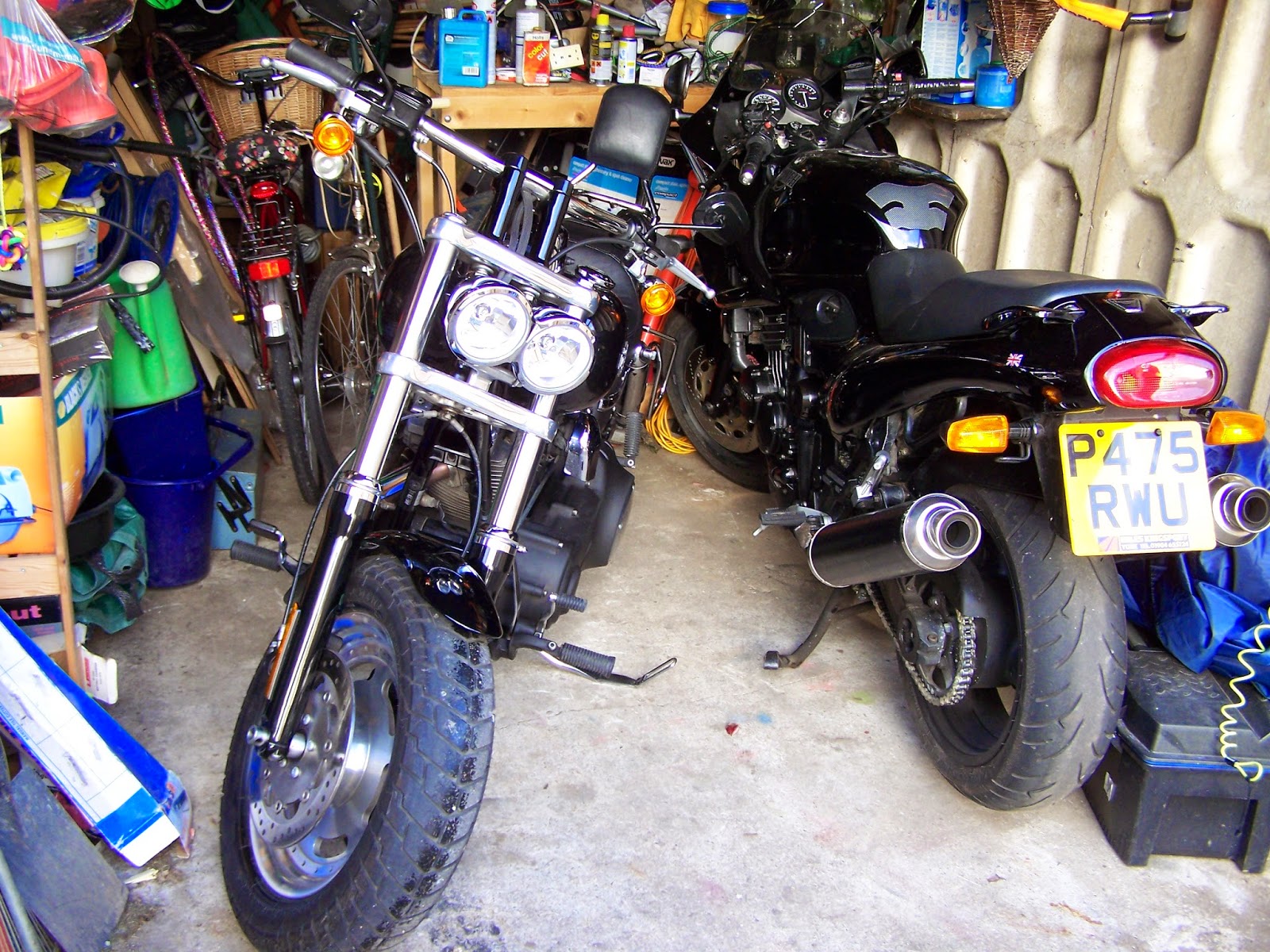 One day I'll get round to actually tidying the garage.

The first vid and a cool new helmet.....

Yesterday morning I had a ride out to call on my life long best mate. Here's the short vid his daughter took on her phone. Best mate is the one holding his grandaughter. Hey! Check out the new helmet, a Shark Raw Kurtz. I love it!

The best bit, of course, is the bike itself!
Posted by Nigel Benson at 16:07 3 comments:

Well, it's been a long time coming, just over four years, or just over 46 years if you count the fact that I've actually wanted a Harley since I was 11, but today was the day when I took possession of my own Harley Davidson.

Those of you who have followed this blog from the beginning will know I changed my mind on what model I wanted a few times and I finally seemed to settle on a Softail Breakout. The idea was to buy a brand new one.

Well, after four years of legal wrangling I did get a large sum of compo but not as much as I would really consider fair. I could still have bought the brand new Breakout, but with my eldest daughter announcing that she is getting married in May 2016 I had to have a bit of a financial rethink. Upshot is I have bought a 2010 Fat Bob with a little over 5K miles on the clock. Collected from Leeds Harley Davidson today, and I couldn't be happier. What a lovely machine.

Here's a couple of photos to be going on with, I'm afraid they were taken using my steam driven mobile phone so quality is not brill. I'll use my camera tomorrow and post some better ones. 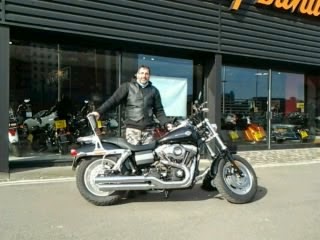 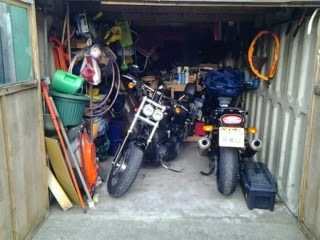 Triumph repaired and Harley to be collected this coming week

Well it really has been much too long since I last posted. Sorry about that. The Triumph with its busted head gasket was garaged over the winter and I was stuck on four wheels. Misery doesn't come near describing how it's been.

The legal crap ground on but finally we got done. Upshot is the Triumph has spent the last few days at A1 Triumph in York getting fixed AND last Thursday I test rode the Harley I'm buying. I will be collecting it from Leeds HD later this coming week. I won't give any more details now, you'll have to wait for the post with photos.

There'll be a general catch up too.
Posted by Nigel Benson at 15:03 5 comments: